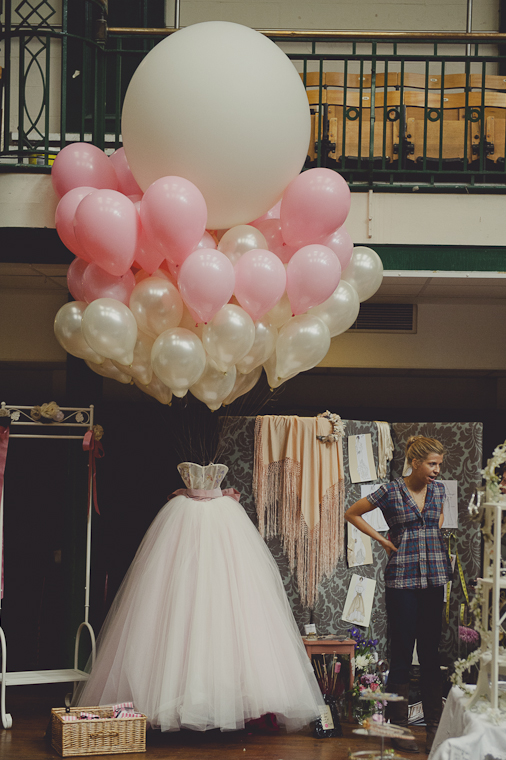 So A Most Curious Wedding Fair LONDON = DONE. It was a wonderful day and are currently posting more of the official images by Ellie Gillard Photography onto the Facebook page as I type. We'll post a few more on here, tell you all about bridal NEXT! (amaze!) and more but remember round 2 is around the corner with A Most Curious Wedding Fair NORWICH at St Andrews Hall on Sunday 21st October!

Ok, we're getting off the point for this post (never miss a chance to plug!) - right now we want to tell you about our Best Dressed Stand Winner for London Autumn 2012. This is chosen by the Most Curious Team, myself (Becky HH) and Gemma Goodwin. We have never done this before but, boy, are we glad we did it this year - the winner is..... FEDERICA BRUNO COUTURE. She made her showpiece, new launch dress FLOAT, yes we said FLOAT. It was always gonna be the person who can defy gravity with their stand. Well done Federica, you are a true creative gem we have had a real pleasure meeting you and long may the new Fed and Most Curious friendship live! We'll tell you all about her in another post but for now here is the story behind the stand. Well done Ms Bruno!


"The idea about the stand came out really spontaneously and quite randomly... I wanted to have my pink and white gown as centre piece of my stand because that's my latest creation. Also I knew that I wanted to have it lifted up somehow, because the voluminous tulle skirt is made of 15 layers which create an amazing shades of colour if seen from underneath. It goes from ivory on the outer layers to a pink magenta inside, with all the shades of softer pinks in between. And I wanted to show this a bit more.

I first thought I could use an arch structure (similar to the ones used in a patio or a garden) and I wanted to hang the dress that way...but the idea was quite banal, I mean not so unique, not so 'wow'...and I wasn't excited enough.

One day I was walking on the street with my girlfriend and we where talking about the stand project. Than I saw some balloons in a shop display and I just thought 'why I don't make the dress fly?! Yes! Helium balloons will make it fly!' Of course I wasn't technically sure of this as the dress is quite heavy and big...but I knew an idea was 'the one' if it makes me think, 'I can't stop to think how i just have to make it real!' The numbers of balloons needed was just crazy considering that a standard size helium balloon can only lift 14g and the dress weight was around 3kg...that tells it all. The only solution was to use a giant special latex balloon, big 5'5"! Together of course with lots of smaller ones!

Even find a balloon company willing to help me in this challenge was not been easy, most said that wasn't possible, or other that I was just a bit crazy... but at the end I've found someone and together we made it real! We made it happen!

We had to use almost 50 standard size balloons, plus the giant one and more have been placed underneath the skirt to help the lift!

The message that I wanted to give is that we have to make our dreams fly, our thought to go free, give a sense of magical, sweet and romantic but also I wanted it to be fun!

A part from the creative element, I also wanted to incorporate something to represent the craftsmanship side of my work, as it's a really big part of it, so I thought to have my vintage sewing machine and all the tools I use as designer and dressmaker...so I've used reels, tailor scissors, buttons and painting brushes and I've put them as stems of "flower" in the pots with flowers!'

And then when all the fun was over Federica set her balloons free. One of the most beautiful moments of the day. 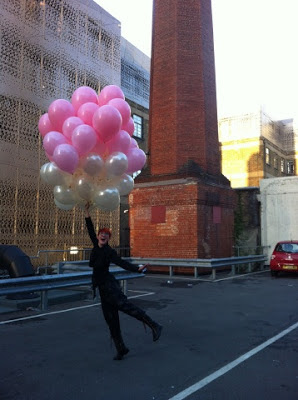 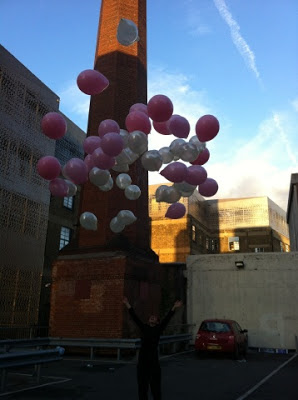 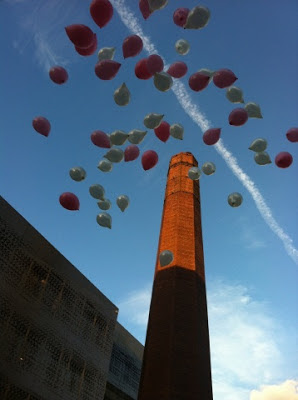 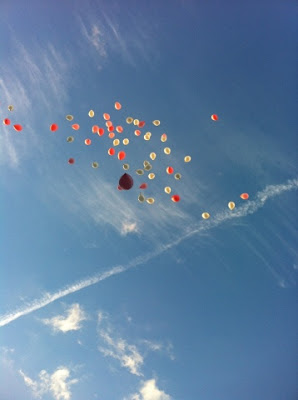 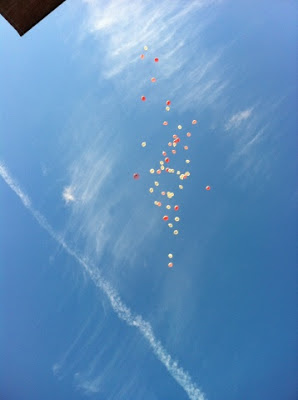